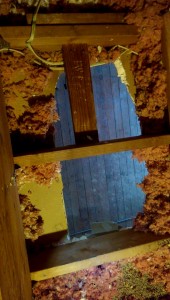 Have you ever had one of those weeks?  Somewhat of a rhetorical question of course as I’m certain that we have all had of those days that role into those weeks.  At the right, you will see the express route from the attic down to the floor.  Now, it would certainly not be advisable to utilize this route as it hurts when you take that route unexpectedly!  Yes, for the first time in nearly 20 years of construction, my foot slipped off the 2×6 ceiling joist and I took a bit of a backward fall and both feet went through the roof.  Fortunately with the backward descent, only got a few scrapes down one leg.  Lets just say I would recommend you not trying to take the express route down from the attic in any home!  Fortunately, we have drywall repairs throughout the house and this section of the roof was already slated to be completely skim coated and a new skip trowel texture.

In placing the beams, it was a bit of a challenge to say the least.  In case you have never had the luxury of playing in your attic when the temperature is quite warm outside, just suffice to say for two days straight, we were soaked to the bone and it wasn’t from playing at the pool.  It was brutally hot which adds to the fun! 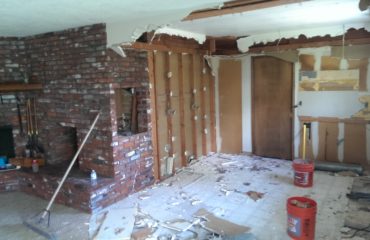 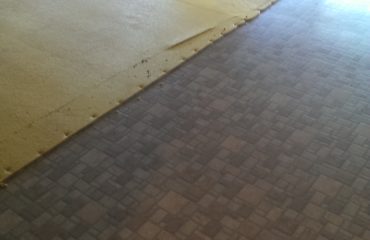 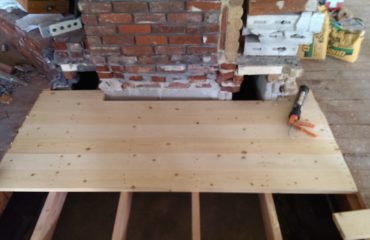